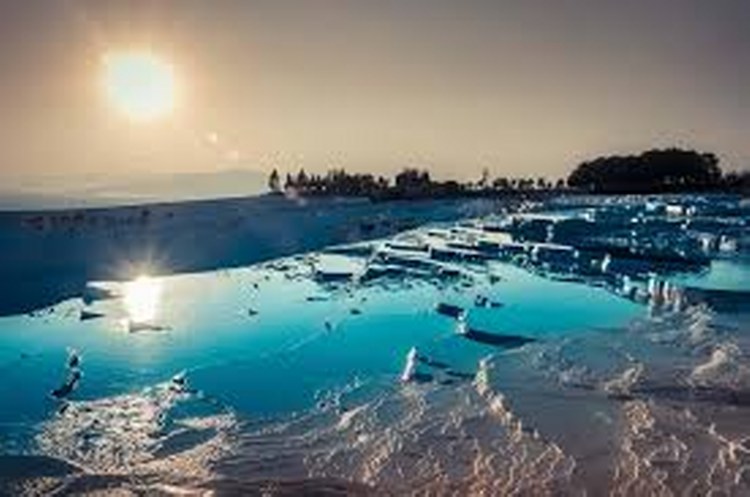 Pamukkale (Hierapolis) Pamukkale: Shaped by the hand of nature and extant since the ancient times, Pamukkale is one of the worlds most outstanding legacies. Located in the province of Denizli this natural wonder is comprised of terraces and travertine formed by hot springs and streams depositing carbonate minerals. Pamukkale has gained eminence for its waters believed to have curative powers and been used as a thermal bath since centuries. Noted for its extraordinary characteristics, the ancient site has been inscribed on the UNESCO World Heritage List in 1988. Located near to Pamukkale, Hierapolis was established in 200 BC by Eumenes II in dedication to the Amazon Queen Hiera, wife of Telephos the founder of Pergamum. Moreover, Hierapolis is an ancient cite that attracts worldwide attention for its majestic buildings and monuments. The ancient city of Hierapolis has lost its Hellenistic façade as a result of a series of earthquakes and gained a new facade reflecting the influences of Roman architecture during the reconstruction period. Among the major cities of the Byzantine period, Pamukkale became a crucial site to Christianity after one of the apostles of Jesus; St Phillip was murdered in this city. The city which fell under the rule of the Turks in the 9th century still preserves its value and significance as on its very first day. Welcoming thousands of visitors for its ancient monuments and natural wonders every year, Pamukkale is waiting to welcome you as well!