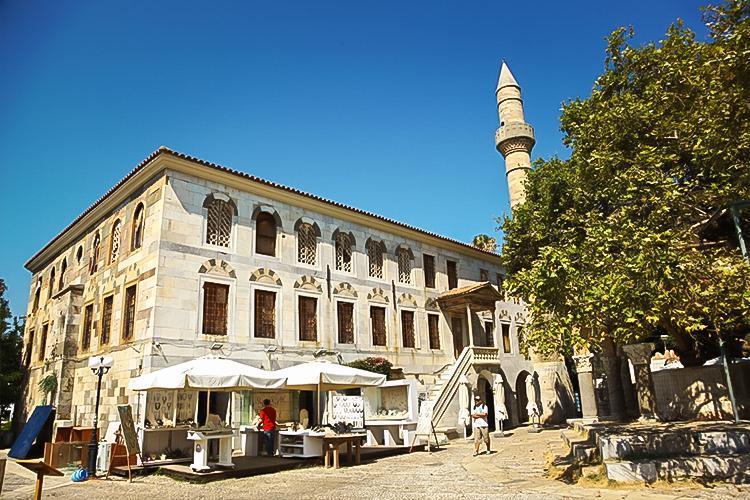 With the Turkish name "İstanköy" island, with the arrival of the Turks began a development. Especially XVII. and XVIII. The number of Turks settled in this island in the 18th century has increased. In parallel, many works have been done. Evliya Çelebi states that there are 11 Muslim neighborhoods, 6 mosques, 4 mosques, 1 lodge and 9 children's schools. The pilgrimage of Güzelce Ali Pasha, who was the grand vizier in 1619, was built by  Ahmed Pasha. A minaret mosque, Turkish bath, a fountain, a large pool and 20 shops were built by this family. The island of Kos, like Rhodes, is home to some of the graves of the Turkish elders. Hacı Osman Pasha, who died in 1745, Hakki Mehmet Pasha who died in 1811, Hekimtaşuzade Abdul Aziz Efendi who died in 1782/3 (1197) are some of them.

It is located in the Lonca area, the archaeological site of the island.

It was first registered by the Greek Ministry of Culture on September 15, 1948 and then on October 5, 2001. It was built in 1776 by Cezayirli Gazi Hasan Pasha. This beautiful two-storey mosque, sitting on the arches, is reached by a staircase. There is a moon-star badge on the ceiling of the porch in front of the gate. The rectangular mosque has a roof. Harimi is passed from the place of the last congregation, whose wooden ceiling was destroyed. In the courtyard of the mosque, next to the Hippocrates plane, there is a beautiful six-cornered fountain with its dome placed on six marble columns, which will attract attention immediately. Cypress trees are embroidered on each side of the fountain's twelve-faced marble water tank. The mosque, which is in ruins today, is closed to worship.

The Mosque of Defterdar